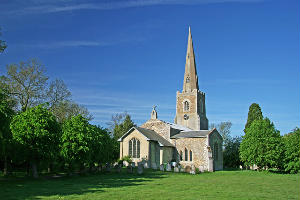 Thanks People with particular responsibility here
The Revd Nigel di Castiglione (Team Rector)
Sylvia McSweeney (Churchwarden)
To send a secure message to the Treasurer click here
Opening times for private prayer with effect from 29th June
Wednesday 10am-5pm
Saturday 10am -5pm
​
Once the building is open please look for the guidance notes as you enter the building to ensure safe use at this time.
​​What's on
For all the latest service information please read the weekly bulletin - Information for Churches by clicking  here
Where to find us The Green, Eltisley PE19 6TQ
Churchyard information
Safeguarding
Parish Safeguarding Officer - Mrs Nichola Donald - to send a secure message click here 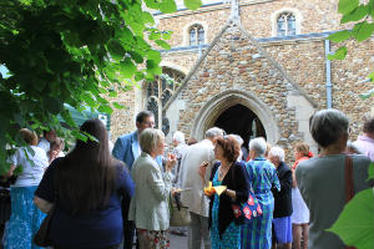 History of the buildingThe nave and aisles circa 1200, are the earliest parts of the church. In the thirteenth century, the north chapel and chancel were rebuilt or extended, and a tower added in the late middle ages. The old chancel was removed in 1841, and although a new, lower one was built, traces of the old chancel remain on the exterior of the church. Church restoration including a new roof, pulpit and pews cost £1,000 in 1878. In 1893 a clock from the parish church of Chertsey, Surrey was placed in the tower. A monastery at Eltisley was among the oldest in England, and Pandionia died at her aunt’s nunnery in the village. In the north transept rests the figure of a crusader, whilst the north chapel holds carved effigies of a knight and robed woman. Robert Palmers, vicar in the reign of Queen Elizabeth I, decapitated both figures. He was also responsible for vandalizing the stonework of Pandionia’s well. He was called before a consistory court in 1576 for these offences and for playing cards when he should have been taking divine service. Text by Peter Eveleigh (2000)