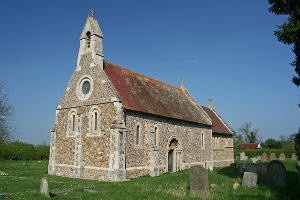 History of the building
Before the Norman Conquest there may have been a small wooden church at Toseland, but a stone church was built about 1130, and parts of this are incorporated in the present building. At an unknown date the chancel became ruinous and was demolished, leaving an almost square church with a hipped roof and central turret. This building also fell into disrepair and was rebuilt on its present plan in 1875 at a cost of £933, raised by subscriptions. Part of the south wall was left, and the rest built on to it in a Norman style, avoiding the contemporary fashion for Victorian Gothic. The north wall is brick, and the remainder pebble with re-used facings of Barnack stone and new Bath stone, the chancel arch being a clear example of this new and old stone mixture. One original window remains in the south wall, and portions of another on the exterior north wall. The fine, elaborately pattened Norman doorway remains. The pulpit was given in 1894, and restoration work was completed in 1908 at a cost of £100. A complicated relationship between Toseland church and Paxton lasted from after the Norman conquest until 1977 when Toseland separated from Great Paxton and joined with Yelling. It now forms a separate parish in the Papworth Team Ministry. Text by Peter Eveleigh (2000)