People with particular responsibility here
The Revd Nigel di Castiglione (Team Rector)
To send a secure message to the Treasurer click here
Opening times for private prayer with effect from 22nd June
Sunday 9am - 6pm
Wednesday 9am-6pm
Please look for the guidance notes as you enter the building
​to ensure safe use at this time.

Where to find Graveley Church  Graveley, St Neots. PE19 6PH
The Parish of Papworth St Agnes has been merged with Graveley for administrative and worship purposes but the building can be found here:CB23 3QZ
Churchyard information
Safeguarding
Parish Safeguarding Officer - Mrs Kay Dimelow - to send a secure message click here 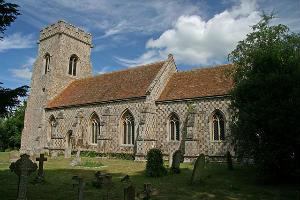 History of the buildings
St Botolph's, Graveley  Dating from the thirteenth century, St Botolph’s Church nave and tower are built of field stones and ashlar, perhaps an earlier church, with dressings of limestone and clunch. Parts of the nave, especially sections of the north wall, are thirteenth century work. Restoration in 1875 saw the south wall and windows rebuilt in the same style. The mainly fifteenth century tower has a modern parapet and doorway. The north aisle with a rather low, sloping roof (the line of this is still visible outside) became ruinous and was pulled down sometime in the sixteenth or seventeenth century. The arcade between the nave and aisle was filled in and octagonal pillars incorporated in the exterior buttresses. Windows, most likely from the old exterior wall, were fitted into the new north wall in a rather rough and ready way. The result is a very irregular arrangement with curious riches and a certain rough charm – a very useful area for modern flower arrangers! Part of the old wall can be seen outside, serving as a very substantial buttress at the west end. Text by Peter Eveleigh (2000)

St John the Baptist, Papworth St Agnes
Although mentioned in the Domesday Book, 1087, the present building, largely constructed in 1850, was planned by the Revd J H Sperling, who also built the adjacent Rectory in 1848. Following the lines of two previous churches on the site, a fourteenth century north door and various mouldings, with a tower arch from the 1530s serve as reminders of earlier builders. 1n 1976 the church was declared redundant, deconsecrated and subject to a demolition order. Petitioned by residents from Papworth St Agnes, the Friends of Friendless Churches helped to save the building. Between 1980 and 1984 the very small population raised enough money to start restoration. However, much of value, stained glass, bells, flooring and pews had already been removed. As well as extensive repairs, a kitchen, lavatories and a modern lighting system were added. Continuing in a different role as a focal point in the village, occasional services are held in the church.