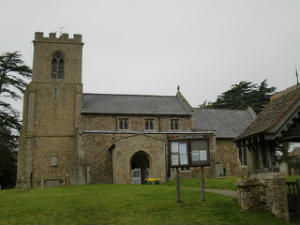 People with particular responsibility here
​The Revd Nigel di Castiglione (Team Rector)
Jean Hill (Churchwarden)
Elly Peal (Churchwarden)
To send a secure message to the Treasurer click here
Opening times for private prayer with effect from 21st June
Sunday 9am - 12 Noon
Please look for the guidance notes as you enter the building
​to ensure safe use at this time.
​What's on
For all the latest service information please read the weekly bulletin - Information for Churches by clicking here
Where we are: High Street, Yelling Cambs PE19 6SF
Churchyard information
Safeguarding ​
Parish Safeguarding Officer - Mrs Nichola Donald - to send a secure message click here 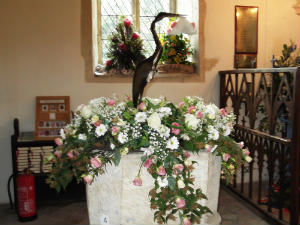 History of the building
Holy Cross Church consists of a chancel, nave, north and south aisles, west tower and south porch. The walls of pebble and rubble have Barnack stone and clunch dressings, and the roofs are covered in slates and lead. Although mentioned in the Domesday Survey, 1086, the oldest section is the north arcade of the nave c. 1180-1190. A south aisle was added in the thirteenth century, the chancel being rebuilt and probably enlarged a little later. Considerable alterations were carried out at the end of the fourteenth century. A clerestory was added to the nave, the tower and south porch were built, and the walls of the chancel altered and raised. A tall octagonal spire originally graced the tower, but fearing that it might fall on the rectory, it was demolished early in the nineteenth century. The font is thirteenth century. Restorations were made to Holy Cross in 1730; the north aisle was rebuilt in 1868/9, and the south aisle and porch in 1889. In January 1978, during gale force winds, part of the east wall of the chancel collapsed, however, the roof and stained glass in the east window were saved.
Great fund raising efforts by villagers, with various grants and donations, enabled restoration to be completed by Easter 1980.
Text by Peter Eveleigh (2000)