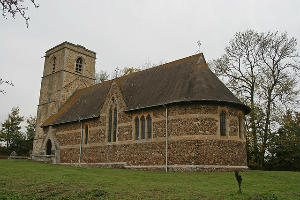 ​Opening times for private prayer with effect from 22nd June
Normally Sunday 9am - 5pm
Thursday 9am-5pm
Please look for the guidance notes as you enter the building ​to ensure safe use at this time.

History of the building
​Ramsey Abbey records indicate a twelfth century church at Knapwell, but none of the existing building pre-dates the fourteenth century. The tower, though much restored, dates from this period. The main body of the church, suffering centuries of neglect was ruinous by the eighteenth century. After the chancel collapsed in 1753, a smaller one was built. In 1785 parts of the nave also fell. With an unusable church, services were held in a village barn for the next eighty years. David Craig became Rector in 1857 but became too ill to minister a few weeks later. Eventually, Henry Brown, appointed curate in 1861, used to walk from Cambridge and back every Sunday for morning and evening services. This remarkable man also collected £700 from villagers and his friends, and a £65 grant from the Incorporated Society for Building Churches, all towards restoration. A successful local architect, W.N. Fawcett, drew up the designs, and the new church was completed in 1866. The tower of field stones and clunch is still drained by its original gargoyles. The church’s unusual structure is low enough not to require buttresses. The main body of All Saints is typical of Victorian ecclesiastical architecture especially in the use of black and red brickwork. The high point of Fawcett’s compact and well-proportioned design is in the chancel’s elegant ‘Ship’s keel’ beamed ceiling and curved apse. Unfortunately the church once again fell into disrepair. Recently, quite a lot of work has been carried out at All Saints. A complete record of Rectors since 1349, shows the Revd W.V. Awdry, creator of Thomas the Tank Engine, was Knapwell’s Rector from 1946 to 1955. Text by Peter Eveleigh (2000)